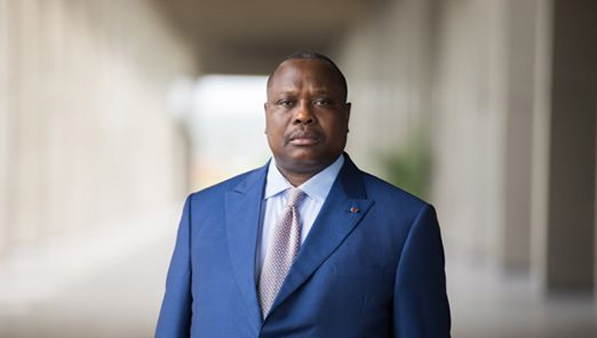 Born in 1962 in Mouembé, Tchikapika district (CONGO), Jean Jacques BOUYA is a graduate of the Dinard piloting school in France (1989) and holds a professional pilot license for airplanes at the Miami- piloting school. Florida in the USA (1988), a Bachelor's Degree in Computer Science (1987) and the Diploma of General University Studies, with a specialization in Pure and Applied Mathematics (1985) at the Université de Sciences et techniques of Lille I in France.

In the exercise of his profession as a pilot, Jean Jacques BOUYA worked for Air France (France) and Sobelair (Belgium) in 1989 and at AERLINGUS Dublin (Ireland) in 1998.

He has been Minister in charge of development, regional equipment and public works since the advent of the eighth Republic.

Cartesian, methodical and meticulous, Jean Jacques BOUYA previously held the position of minister at the Presidency of the Republic, in charge of regional development and the General Delegation for public works, delegate general for public works, and transport and equipment Adviser for the Head of State, after having served as pilot of the Boeing 727 at the Presidency of the Republic (1989-1991) and the Fokker 28 at the Lina Congo airline (1989-1997).

For his loyal services to the nation, Jean Jacques BOUYA was elevated to the rank of grand officer in the order of Congolese merit. He is also the holder of several awards, including:

Jean Jacques BOUYA, also holds a Baccalaureat (High school diploma), series E at the Lycée Technique of May 1 1981, a Brevet d'Etudes Moyennes Généraux (BEMG) at CEG Nganga Edouard in 1978 and a First School Leaving Certificate (CEPE) at the Edou Primary School in 1974.

Member of the political bureau of the Congolese Labor Party (PCT), he is a member of parliament for Tchikapika in the department of Cuvette.

Married and father of four (4) children, Jean Jacques BOUYA is passionate about scientific and technological discoveries.

Under the provisions of Decree No. 2012-1255 of 29 December 2012 amending Article 1 of Decree No. 2012-1157 of November 9, 2012 on the duties of the Ministry of Regional Development and the General Delegation of Public Works, the latter implements the policy of the nation as defined by the President of the Republic in the areas of regional development and public works.

As such, it shall have the responsibility to: